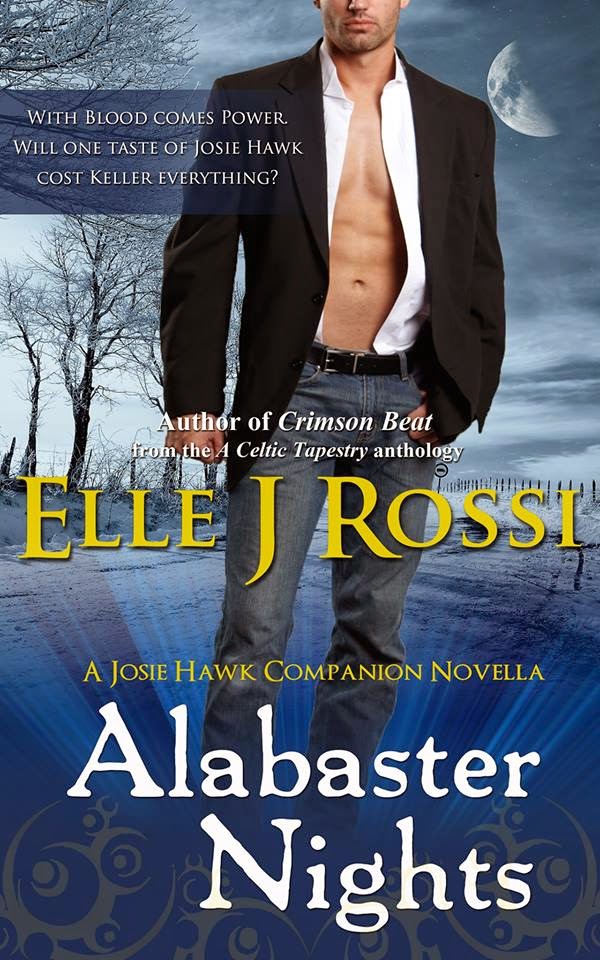 A Vampire with a soul. A Huntress with a knife.

In Nashville, Blood equals Power. Will one taste of Josie Hawk cost Keller everything?

Elle J Rossi has given us a view into The Josie Hawk Chronicles titled Alabaster Nights.

We get to meet Josie and Keller, Josie is a huntress and Keller is a vampire.

Keller has had a hard transition as a vampire he still to this day cannot control his desires for blood. Josie who is a huntress and has some sort of magical blood has a few demons after her.

But meanwhile Keller knows that Josie is someone important to him and she may be his answer to help him calm his blood lust.

This is a short novel of opposites attract and it was a great prequel to a start of what I think will be a great series and a great romance.

I would recommend Alabaster Nights to anyone who loves the paranormal genre. The story is well written, the author has done a fantastic job in making me want to read the next book in this series.

I have rated Alabaster Night a 4 star rating. Fantastic Read!!

Elle J Rossi grew up in rural Indiana surrounded by great people, a huge family and more animals than she could count. But the sites and sounds of the world beckoned, so she left her small town to escape into a creative world full of music. As a full time singer she was able to lose herself in a thousand different songs in a hundred different places. After meeting the love of her life and settling down, she yearned to find a new and fulfilling creative outlet. Overly fond of the happily ever after, she wondered what it would be like to have her own characters lead her down dark and twisted paths. The very first word on the very first page sealed her fate. She’d found a new love. She’d found her escape. Now along with weaving haunting tales about the journey to love, she’s creating cover art for authors around the world and loving every second of it. For fun, she cranks country music to take her back to her roots, and sings karaoke anytime she gets a chance. Her husband, two children, and a cat that rules the roost keep her company along the way and guarantee she doesn’t get lost in the enchanted forest. She wouldn’t have it any other way.

Email ThisBlogThis!Share to TwitterShare to FacebookShare to Pinterest
Labels: Reviews