Blood and Magic by Ann Gimpel 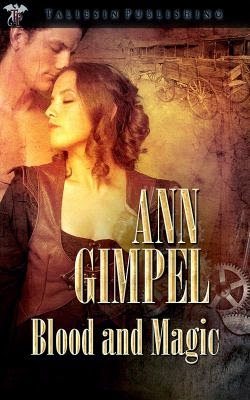 Blood and Magic
by Ann Gimpel

Can Luke conquer his past and claim the only woman he’s ever loved?

Abigail Ruskin is chaperoning a spoiled twelve-year-old from New York to her parents’ home in Utah Territory when Luke gets on their stagecoach in Colorado. A powerful witch herself, Abigail senses Luke’s magic, but he’s so overwhelmingly male, she shies away from contact. Stuck between the petulant child and Luke’s raw sexual energy, Abigail can’t wait for the trip to end.

Wraiths, wolves, and humans with dark magick attack. Unpleasant truths surface about the child and Abigail’s well-ordered world crashes around her. Luke’s so attracted to Abigail, she’s almost all he can think about, but he’s leery too. In over his head, he summons enforcer backup. Will they help him save the woman he’s falling in love with, or demand her immediate execution?


My Review:
4/5 stars
Blood and Magic is a quick, fun story full of adventure, magic, suspense, and romance.  One of the things I really like about it is that it is a standalone, which is a rarity.  Abigail is chaperoning a child home on the stagecoach while Luke is playing bodyguard.  Abigail is a witch, a strong female lead, which I absolutely love.  Luke is an enforcer for a group of witches, a protector.  Together they must fight through all sorts of dark magic to keep themselves alive.

The connection between Abigail and Luke is great.  I enjoyed both of the characters, which of course is always a plus.  I also loved the different forms of magic described in the book.  The author did a great job of building the story and creating a believable backdrop for what was to come.  Set in the 1800s, Blood and Magic is an imaginative story that will keep you turning the pages. 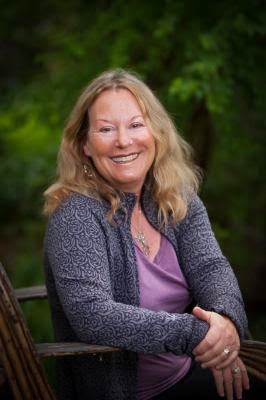 Ann Gimpel is a mountaineer at heart. Recently retired from a long career as a psychologist, she remembers many hours at her desk where her body may have been stuck inside four walls, but her soul was planning yet one more trip to the backcountry. Around the turn of the last century (that would be 2000, not 1900!), she managed to finagle moving to the Eastern Sierra, a mecca for those in love with the mountains. It was during long backcountry treks that Ann’s writing evolved. Unlike some who see the backcountry as an excuse to drag friends and relatives along, Ann prefers solitude. Stories always ran around in her head on those journeys, sometimes as a hedge against abject terror when challenging conditions made her fear for her life, sometimes for company. Eventually, she returned from a trip and sat down at the computer. Three months later, a five hundred page novel emerged. Oh, it wasn’t very good, but it was a beginning. And, she learned a lot between writing that novel and its sequel.

Around that time, a friend of hers suggested she try her hand at short stories. It didn’t take long before that first story found its way into print and they’ve been accepted pretty regularly since then. One of Ann’s passions has always been ecology, so her tales often have a green twist.

In addition to writing, Ann enjoys wilderness photography. She lugs pounds of camera equipment in her backpack to distant locales every year. A standing joke is that over ten percent of her pack weight is camera gear which means someone else has to carry the food! That someone is her husband. They’ve shared a life together for a very long time. Children, grandchildren and three wolf hybrids round out their family.


…It wasn’t Luke but a long, drawn-out shriek that brought Abigail thumping back to consciousness, her heart hammering triple time in her chest. Eyes wide and staring against the darkness, she warded herself just in time. Strong magic battered her. She tried to sense Luke, but that was the problem with wards. They protected by forming an impenetrable barrier and corralled her magic inside.


Whatever was pummeling her seemed to have given up. She risked chinking enough of a hole in her warding to send a tendril of magic outward because she needed information. When it came, it terrified her so badly, her heart stuttered. Dark things surrounded them: wraiths, mad wolves—those who’d been turned to serve the other side—and humans who’d sold their immortal souls for forbidden knowledge. Had the girl rallied them? How could she possibly be that powerful? Luke didn’t seem to be anywhere. Abigail hoped he’d concealed himself out of harm’s way, because the two of them couldn’t make the slightest dent in the dark horde outside. The stagecoach rocked and she realized someone was climbing onto the roof. Throat so dry she could barely breathe, she mended her warding.


The books. That’s what they want… Let them haul the miserable things out of here. She knew she should risk heaven and hell to keep such knowledge out of dark hands, but Abigail didn’t see how throwing her life away would alter the outcome. She heard voices speaking the Satanic tongue, and then dragging sounds as someone transferred the trunk to the ground. Luke shouldn’t have bothered to put it back up top, she thought grimly.


What had the Girauds been doing with such arcane tomes in the first place? She supposed there was the slightest chance they’d been protecting them from falling into the wrong hands. Yes, by all means, let’s give Coven members the benefit of the doubt. Except it was a struggle, and she didn’t know who the hell to trust anymore.


She waited until it was absolutely still outside, and a tentative scan told her the dark host she’d sensed earlier had moved on, before loosing her wards. The minute she did, she felt Luke’s energy. He pulled open one of the coach doors. “I scared up a couple of horses from a nearby farm. We need to go after those books—and the girl.”


She fought down the protest that rose to her lips, but it slid out anyway. “There aren’t enough of us.”


“Fixed that problem too.” He smiled grimly. “I can ward you if you want to stay here, but if you’re coming we need to get moving. Don’t want to let the trail get too cold.” From the smirk in his voice, she knew he was being sarcastic.


She sent her magic spiraling outward and felt the books pulsing with evil. No way that path would ever get cold. “Why couldn’t I feel them this strongly before? I know the trunk had to have been spelled, but still…”


“The trunk was spelled, and by someone with magic to burn. It’s over in those trees. I guess Carolyn’s minions were in a hurry and didn’t have a wagon.”


Abigail felt like a rube. The book trunk had already been packed and sealed when she’d picked Carolyn up in New York. She’d never even thought to examine it. “Did you see Carolyn?”


“Yup.” His upper lip curled into a sneer. “Caught a glimpse of her riding a mad wolf.”


“Do you suppose there’s some way we could separate her from Goody Osborne?” Abigail bit her lip nervously.


Luke shook his head. “Even if we could—and I don’t think it’s possible—there are too many unknowns. Her parents might have been turned. If that happened, the kid could have embraced evil before it entered her body. By the time we sorted all that out, the dark would have had one too many chances to kill us.”


Abigail winced at the unvarnished truth in his words. Any residual doubts she held about the necessity of destroying the girl melted away. “Yes,” she said through clenched teeth. “I’m coming with you.”


Luke boosted her onto one of the horses. She pulled her skirts out of the way. It was a normal saddle and this was scarcely a time for modesty. Luke vaulted onto his horse, kneeing it, and they took off up the Overland Stage Road at close to a full gallop. “We’re making too much noise,” she sent.


“Doesn’t matter. They’ll expect us to come after them.”


She clung to the horse with her legs, enjoying the feel of not having to ride sidesaddle. Luke’s horse was larger, faster, and soon pulled so far ahead she could barely see him. She kneed her horse, urging it to greater speed, but the animal shied, and then reared. Abigail struggled for balance and called magic to calm the spooked animal. Something sprang at her and knocked her to the ground. She sent killing magic to stop its heart, before realizing what it was. Panting, she crawled out from under a black and gray mad wolf with blood dribbling from its nostrils, and glanced warily about. Were there more of them?


Carolyn stepped from the shadows. It looked as if she was alone, but Abigail suspected otherwise. “What do you want?”


“Simple enough. I plan to use you to get rid of Breana Giraud—and others.” A sneer twisted the girl’s features into something unpleasant. “You think people don’t know you’re part of Coven government?”


Abigail set her mouth in a hard line. “Fine. So the other side knows about me. Question is, who are you really?”


“Don’t you recognize me?” Carolyn stepped closer and turned her face from side to side as if posing for a photographer. “I gave you my name, but I am far more than that.”


She’s arrogant. Perhaps I can use that in some way. Abigail spread her hands in a placating gesture. “Because I’m used to seeing you as Carolyn Giraud, I’m not certain who you are.” She paused for emphasis. “I’d like you to tell me.”


“Certainly.” A feral grin made the child look like something out of a nightmare. “It is always better to know who your adversary is.” Her voice became soft and silky. “I have access to magic you would kill for. You may not know it, but you’d like to work for us.” She laughed, but it sounded more like broken glass shattering against itself, than a twelve-year-old girl’s mirth. “We have real power, not that paltry tripe the Coven settles for.”


Abigail waited. When Carolyn didn’t say anything else, she said, “I’m listening…and considering your offer. Life is always better than the alternative.”


“Ha! They said you couldn’t be turned, but I told them they were wrong. I am The Promised, resurrected out of legend. Goody Osborne was but a start, and this little girl is merely a convenience.” Something like an outraged squawk followed the words, but Goody silenced Carolyn almost immediately. “What I really want is you, Abigail Ruskin.”


Shit! She couldn’t be The Promised… “You mean the Dark Messiah?” Abigail scrunched up her face and held her breath, hoping against hope she’d gotten it wrong.


“The same.” A supercilious expression etched into the girl’s features. “At least the other side has heard of me. Warms my black, black heart.”


“The books—?” Abigail hunted for a connection while she rode herd on terror that threatened to immobilize her, and clouded her judgment. If ever she needed a clear head, it was now, but her mind raced feverishly.


“They weren’t doing the girl’s parents any good moldering away in that underground chamber. I’d actually been searching for them for years.” She flashed a sly smile. “They used to be mine…”